Hooksett's Heritage Month continues along thanks to the dedicated efforts of the Heritage Commission.  Town Council proclaimed May "Heritage Month" as a way to celebrate the past and encourage preserving what remains of the town's priceless cultural legacy to enrich the present and future. To commemorate this, the Heritage Commission has been compiling historical stories and images:  Below are more scenes from Hooksett's vibrant past that iinclude some historic landmarks and attractions that gave the the town so much of its character! 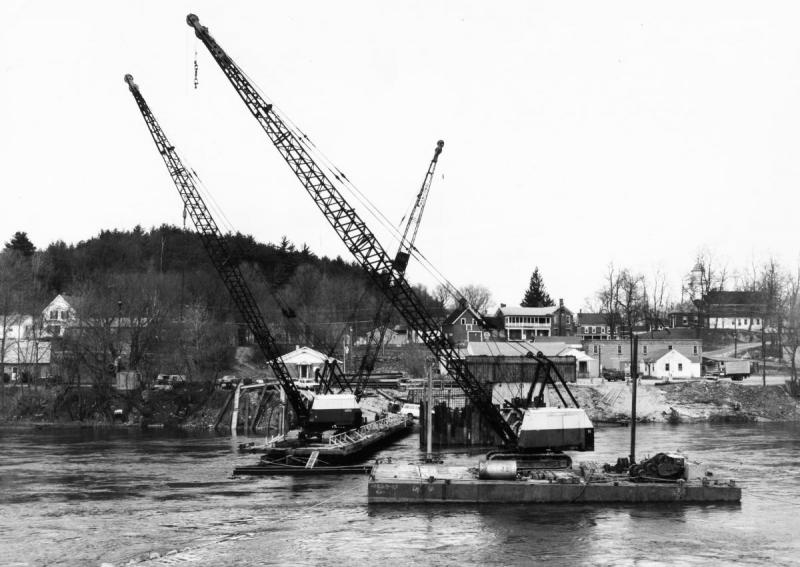 The variable-depth, horizontally curved girder bridge is 675 feet long and has five spans.  There are nearly 1,400,000 pounds of structural steel and about 900 yards of concrete in the deck. It was dedicated in August 1976 replacing the Lilac Bridge to the east.  Note the number of structures on the west side of the river on Riverside, Rosedale and Main Streets that were subsequently demolished to make way for the bridge. 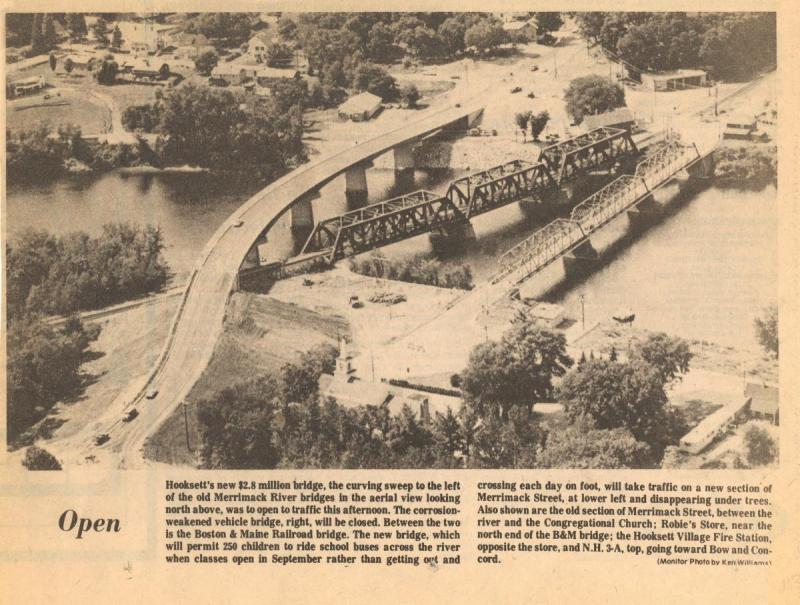 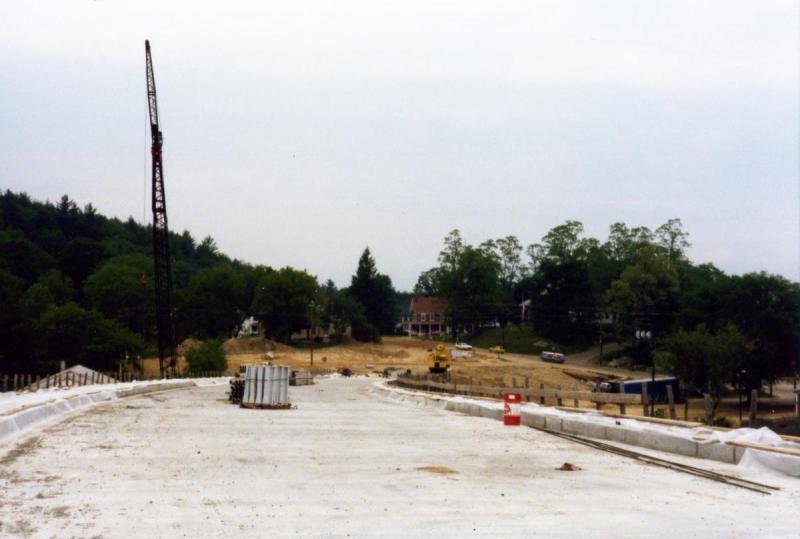 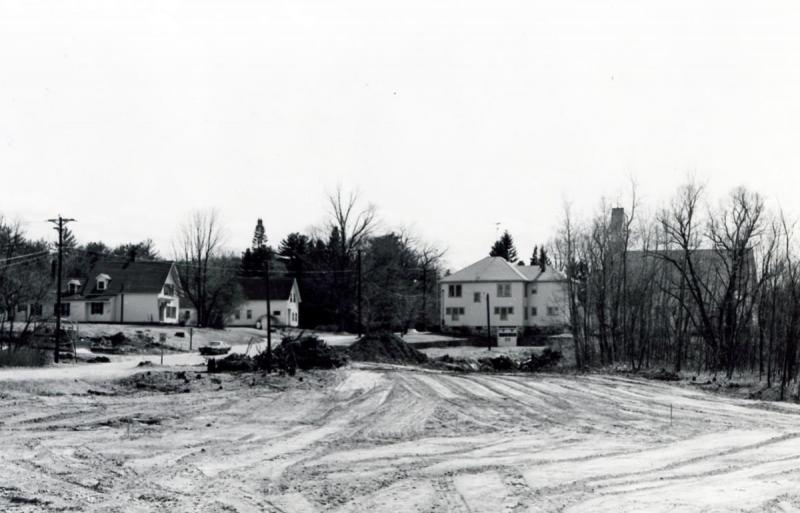 PLEASURE BOATING ON THE MERRIMACK RIVER 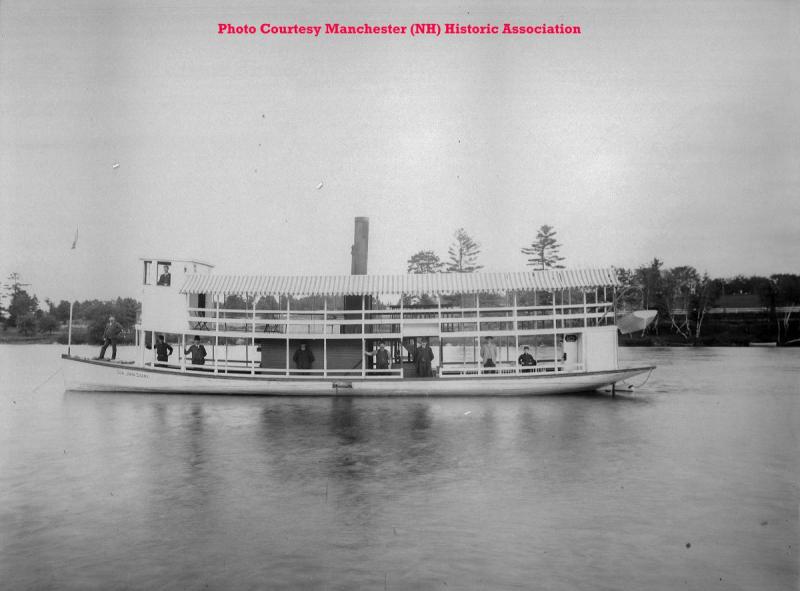 The Merrimack was critical to Hooksett’s commercial and industrial development.  In the late 1800s, the picture of boating on the Merrimack changed considerably.  It was no longer profitable to haul freight on the river, the railroads had long usurped that function.  Yet the river had lost none of its appeal.  Many small cottages and summer homes sprung up on its banks. Pleasure boating flourished.  The Manchester-Hooksett Steamboat Company constructed several steamboats.  There were 2 or 3 steamers that traveled the river between Manchester and Hooksett.  Shown is the General Stark. The largest of these steamboats, the General Stark, made several runs daily.  The Steamer General Stark was a very large vessel, one of the largest to ever travel between Manchester and Hooksett.  It was almost 90 feet long, and could carry almost 100 passengers 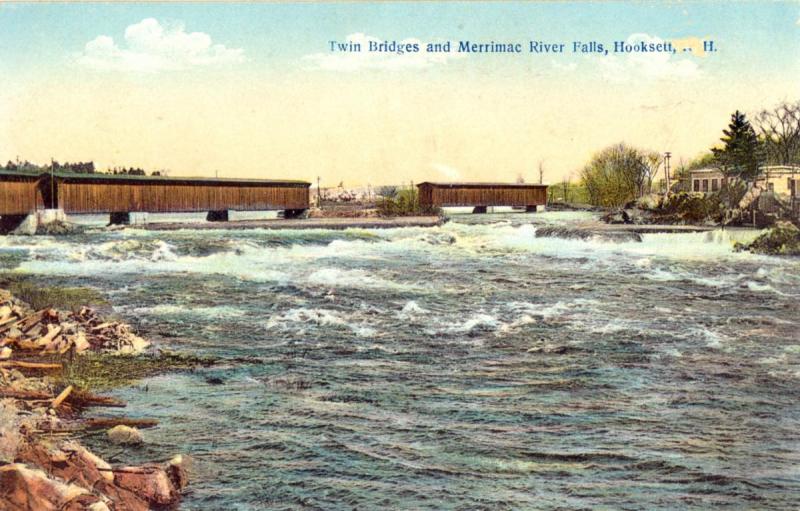 In 1868 the Concord Railroad built three wooden bridges across the Merrimack River above the falls in Hooksett in order to supply service to Suncook and the towns along the Suncook Valley to Pittsfield and Barnstead.  It was said that the location gave “occupants of the cars a grand, romantic view.”  These bridges had been slated to be dismantled by the Boston & Maine Railroad, but the flood of 1936 intervened.    The bridges were washed down river over the Hooksett Falls and caused the collapse of the brick two-story Village School and the Odd Fellows Hall (on what is now Veterans’ Drive) and also damaged or destroyed several other buildings including serious damage to both the Protestant and Catholic churches. The abutments can still be seen just south of the Courthouse on Merrimack Street.

Such an interesting architectural design--1 span, then an island, then 2 spans. The bridges received some damage in the 1927 flood but were repaired and reopened. All 3 spans were lost in 1936. One old photo has a note: "The cause of it all." 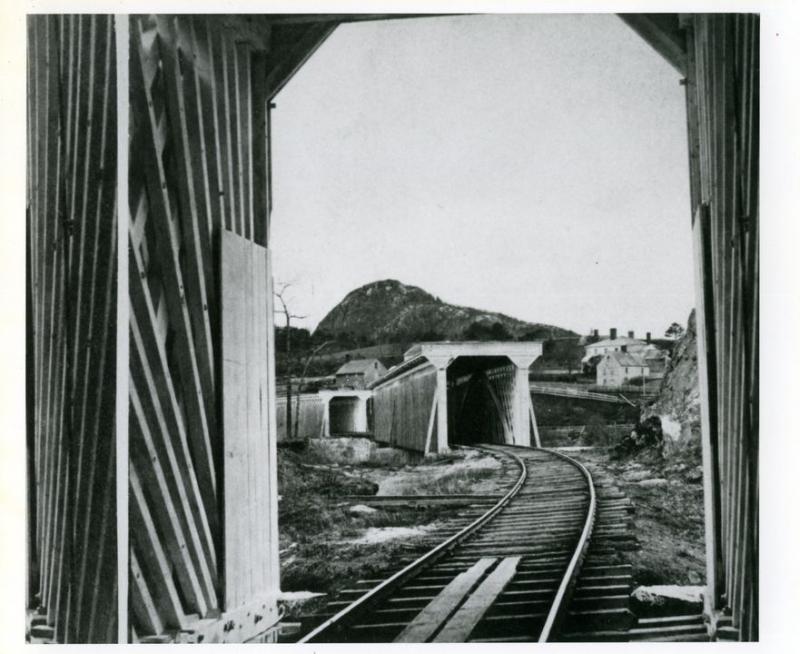 From the east side looking west. From the island you'd get a great view of the falls. Photo either before 1892 or after 1923 as there's no observation tower on the Pinnacle. 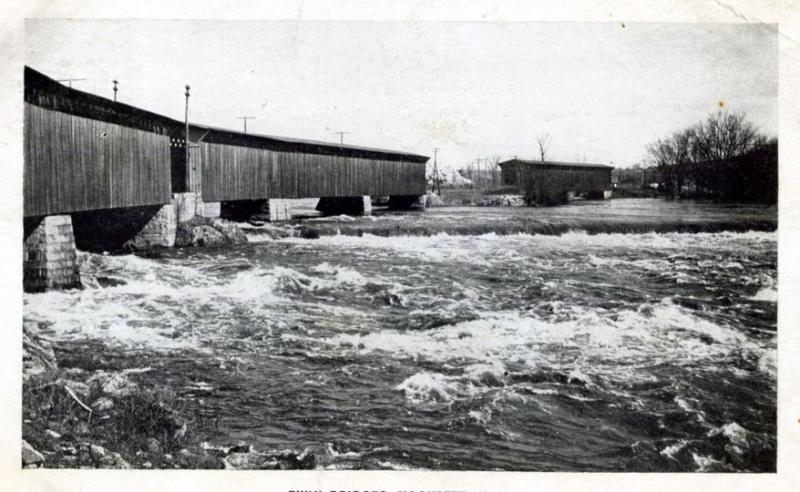 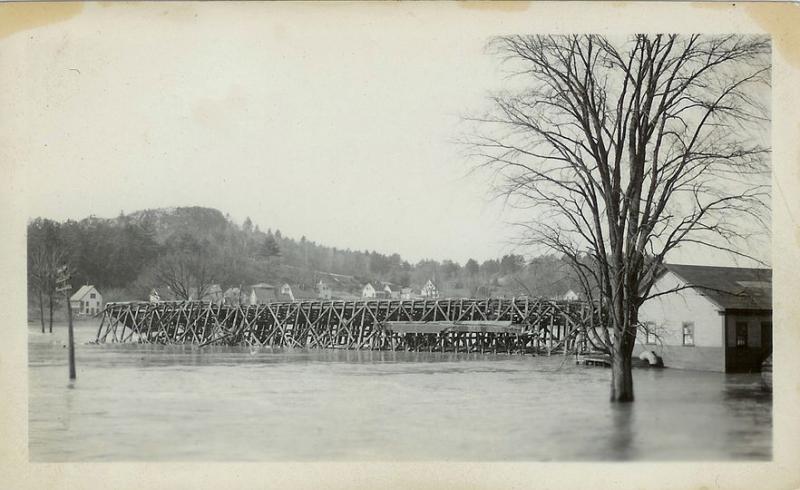 One of the spans on its way down river. That's the Odd Fellows Hall on the right flooded almost to the 2nd floor. The Village School (to the left of Odd Fellows) is already gone. 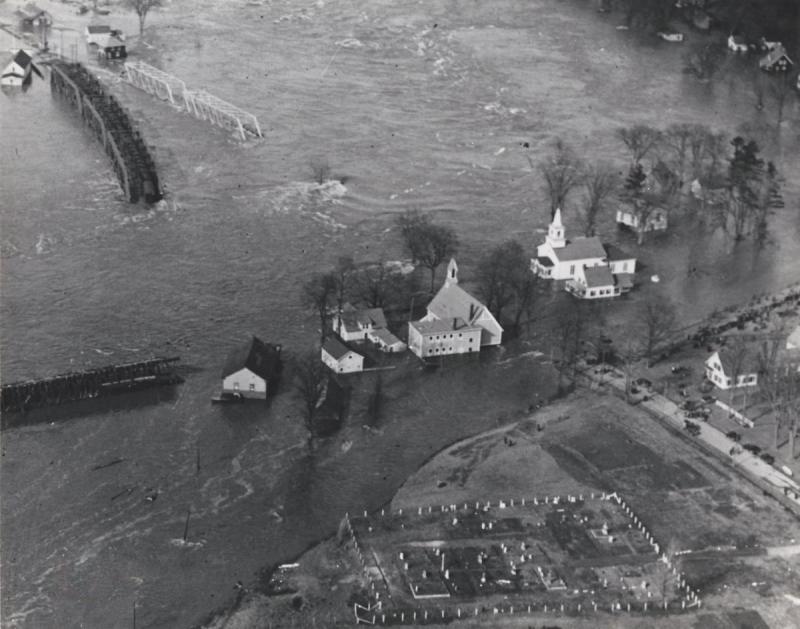 What a startling photo showing the impact of the flood and the bridges. Bottom left is a covered bridge span. The south span of the steel bridge (silver color) is already gone. The two churches are there, but the Village School is missing. See Robie's and the present-day Water Precinct building in the upper left. 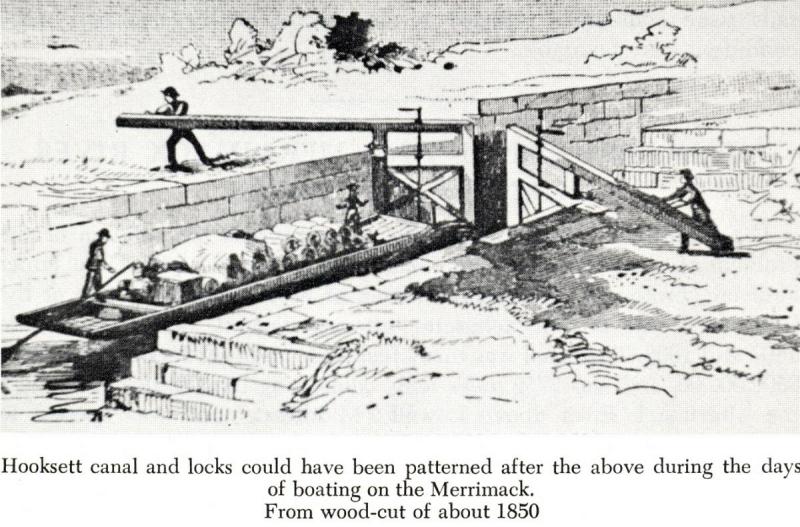 Opened in 1811 with 2 lift locks (by comparison, Amoskeag had 9), the Hooksett Canal was 1/4 mile in length.  It was part of a system of canals and locks on the Merrimack between Boston and Concord.  Flat-bottomed canal boats were 40-75' in length and about 9' wide and were operated by 3 men–1 skipper and 2 bowmen. Up-river items barged were rum, sugar, molasses, tea, flour, and general merchandise.  Down-river shipments included bricks, lumber and granite.  The canal system was phased out when train service began in the 1840s. Remnants of the canal are still visible on the west side of the river near the falls. 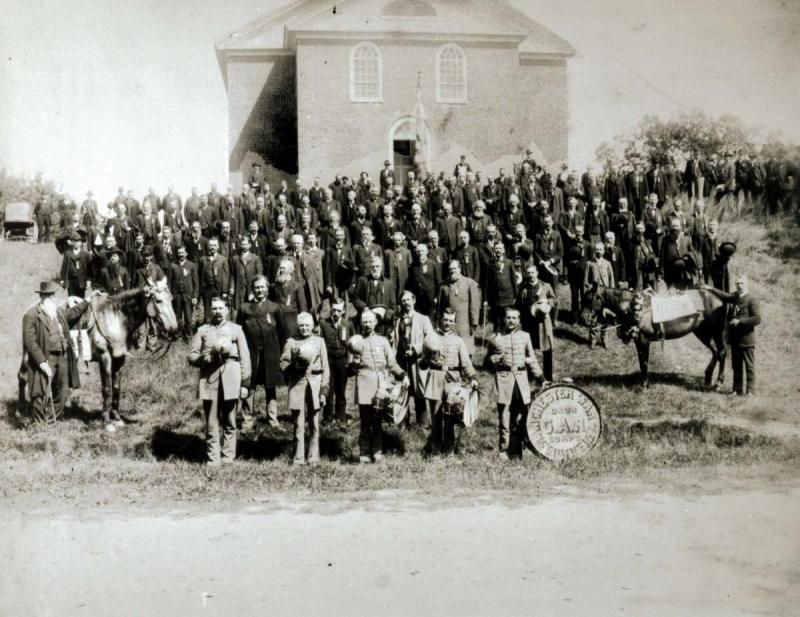 Hooksett sent more than 130 men to serve in the Civil War.  Veterans of the 10th Regiment of the NH Volunteer Infantry met in Hooksett to celebrate their 20th reunion after the Civil War.  This photo was taken on September 10, 1885, in front of the Town Hall.
Notice on the drum the initials G.A.R.  You’ll also see these initials on markers or headstones in Hooksett’s cemeteries.  The acronym stands for the Grand Army of the Republic, a fraternal organization founded in April 1866 and composed of veterans of the Union Army who had served in the Civil War.

A very popular spot in town, the Sky Ray was built by the Bourque family in 1949 and owned by them until 1953. The family then sold the theater to a distributor who operated it for many years. But the theatre made news in 1969 when John Laughlin, Jr., then manager of the Sky-Ray, was the first person in the state to be charged with violating NH’s newly crafted pornography rule for showing Russ Meyer’s Vixen. Laughlin was found innocent.The theatre would run another 16 years. t was located on the site of the Hooksett Village Shops plaza (Shaws) on Route 3